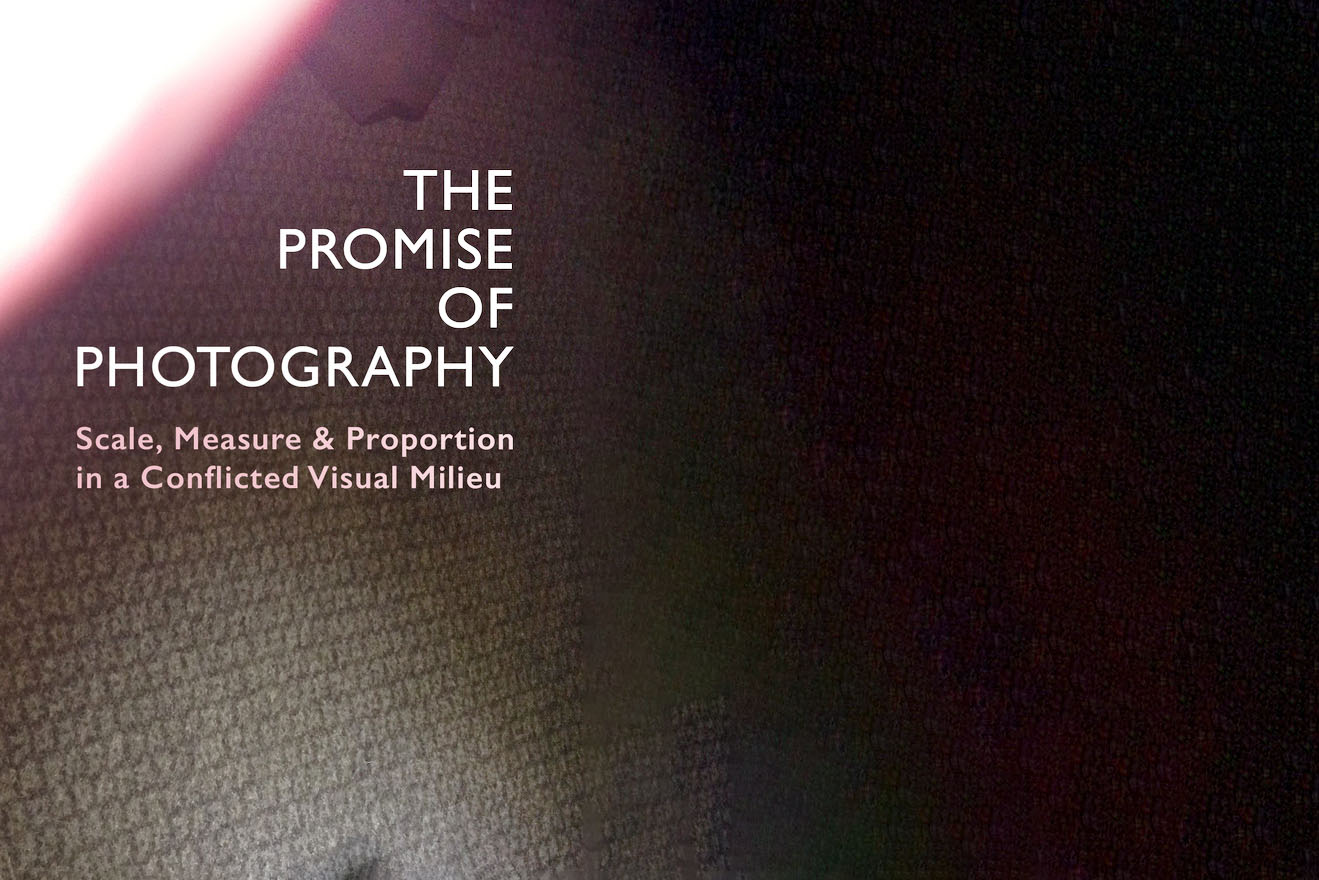 the promise of photography: scale, measure and proportion in a conflicted visual milieu

This online conference marks the culmination of the Prague based collaborative research project: Scale, Measure and Proportion in Contemporary Visual Cultures. It is organised in collaboration with Philosophy of Photography to celebrate the journal's 10th anniversary and hosted by FAMU (the Photography Department of the Academy of Performing Arts in Prague). It brings together researchers from a range of fields to explore the conceptual constellation of measure and dismeasure, proportion and disproportion, scalability and unscalability and to examine the material forms and processes denoted by these terms as they combine to shape the contemporary visual milieu.

Examining the interrelation between contemporary meanings of measure, proportion and scale very quickly brings one up against a lack of measure, faces one with experiences of unscalability and situates one in a climate of disproportionality. Our heterogenous and conflicted times are marked by competing ideas of measure and its lack. The lives of millions are routinely shaped by claims to proportionate political and economic action whilst also being subject to the disproportionate conditions these claims serve to disguise. Generalised conditions of scalability govern the globally networked technologies that frame such relationships, inscribing everything in its processes of de- and rescaling while evoking novel and often fraught experiences of the unscalable. The capacity of images to render the world sensible, to place things in proportion, give scale and thus a measure to them is transformed and attenuated. The promise of photography sets out to investigate this situation.

What, in this context, is one to make of the image’s many explicit uses as a tool of measurement and the critical discourses that examine these? There is a clear need, for instance, to continue the deconstruction of the image's promise to act as a map that will set the world to measure. Yet photography and technical images at large constitute spaces of equivalence and commensurability. Things “come together” through images, thus establishing the conditions for their comparability. The potential of photography to make things equivalent or to provide some kind of common standard has been voiced repeatedly with various implications, from Oliver Wendell Holmes’s (1859) praise of photography as an “universal equivalent” to 20th-century criticisms that understand equalizing as both a flattening and emptying out of substance (exemplified by Susan Sontag and Allan Sekula in the 1970s) or contemporary approaches that situate photography within a larger context of political economies of becoming visible (as in the recent work of Peter Szendy). Any photograph is the result of a complex series of measurements, often embodied into standards and norms and circulating within larger administrative and political systems of standardization based on sedimented practices of measuring, scaling, grading and calibrating.

It is increasingly clear that to make, look at or use a photographic image today, is to find oneself inscribed in a constellation of facts of scale, processes of scaling and conditions of scalability. The massive and accelerating numerical expansion of photography, to take one prime instance, presents an unprecedented existential problematic by restructuring the individual's relation to the many and to the processes of world formation they may be supposed to share in. The context of impending ecological disaster renders these existential questions of shared world formation fraught, if not moot, presenting a demand for new critical, theoretical and practical insights into their terms. If discourse on the contemporary image very often bemoans a loss of measure, of scale and a sense of proportion, what is one to make of the historical force of the photographic image as a prime disruptor of inherited cultures and as a counter to the imposed politics of measure? What of the disorderly image as a possibility and promise, and not just a threat; a disruptive entity that might enable transvaluation of existing norms of measure, offer theoretical insight into generalised conditions of scalability and grant critical purchase on material facts of disproportion.